How much time you are waiting for the computer to boot-up ? Ha, Ha, now I see you are smiling! This is why you have come to this post. I’ve been researching the Net and Google-ing  some forums to get the answers for this 100$ question!  How to speed up Windows 8 or 8.1 boot times ? I won’t give any out-of-the-blue answer on this subject, but will tell you about an exisiting magic wand from Microsoft that helps you troubleshoot such issues. Answer, later in this post!

First of all, there are several scenarios!

You can see my previous post on this subject for a tool to check boot times in Windows. This will help you visually without any commands (a clean interface) to check how many seconds your computer takes to boot-up in different cases, I listed above.

But first let me tell you my experience with this boot issue.

I don’t remember how exactly, but was able to improve my boot speeds on my 32bit Windows 8.1 OS. It was taking like 45 seconds to boot-up. When I checked others on BootRacer site, I found that some computers were even able to boot-up in 7 to 8 seconds. Wow! thats really fast..

I have a dual boot configuration scenario. 32 bit Windows 8.1 and 64 bit Windows 8 on the other. My irritation started when the 64 bit was taking like 2 minutes or so, to boot-up. In addition to that, the computer started freezing after the boot-up was over. It would last for about 6-10 minutes. I don’t know exactly how to check that!

So one remedy I hypothesized was that, probably the latest updates would decrease my boot times and solve my performance issues. Na, it was not the case-to-be. The problems still persisted and the same with freezing issue. So now I polished of the cause that it was an update problem, just like doctors do.

I also updated the 64 bit system with latest Update 1 release and several other updates.

What to do Initially when Windows 8 or 8.1 boot times are slow ?

The first thing many of Windows 7, Vista and XP users know is to switch off some start-up applications and tablet apps. It applies to Windows ‘Metro‘ also. You can check this article on “Task Manager” to see how its done in 8 or 8.1. A slight change is there on how to go to “msconfig” or disabling start-up items.

The second step is to disable services which are hogging your resources. 64 bit OS have lot of services whose startup type are “Automatic” or “Automatic (Delayed Start)“. Some of them can be safely turned to “Manual” or “Disabled”.

But which one to and which one not to ? You can follow this tutorial on your 8.1 computer. For 8 32 bit and 64 bit service configurations you check Google with this query “startup services to disable in windows 8“.  This provides a good list of web sites which I checked.  Otherwise you can check the above site to find further information.

Another important step which you have not done is to check your computer for viruses, malware, adware, trojans and rootkits. This is an helpful article from Microsoft in such scenarios. Many of the forums suggest you to submit your anti-virus trace logs using different programs, which may be beneficial in the rarest of cases. Most of the current Anti-Virus, Internet Security and Cloud-Protection software products are able to nullify most of your problems if you are infected.

One ambiguous step I don’t recommend is turning off “Pagefile” and disabling “Superfetch” and “Windows Search” services.  I found some resources to utilize this tip to improve boot speeds and computer performance. But there are pros and cons using this step. I personally found some improvement in boot times when I applied the above step..That’s why I call this a confusing footmark in your trouble-shooting heuristics.

But it was not consistent and I also need search for faster execution of my computer commands.

Hmm. You are waiting for an answer. Ya, you’ll be, if you are really pestered by this problem. Otherwise you might have left this post by now. It’s called “Windows 8 Performance Toolkit“.  Yes, this will be little tricky! Why? Because it takes a good internet connection and bandwidth to download this tool, some important time to create logs and mind skills to analyze these reports.

I’m not a technical geek or expert in this scenario. All that I find is based on my own experience and some research on Google.

You can download this tool for FREE from Microsoft. This tool was also called “Xperf” in earlier versions of Windows. Now it’s known by the shorter names – WPT, WPR, WPA. It’s part a bigger package called “Windows Assessment and Deployment Kit“. (ADK).

The download size was around 3.2 GB (WPT only) (don’t  be fooled by the setup file size which is only 1.2 MB) and the size is bigger if you want to download other tools. Since the download was through Microsoft’s download tool, it took much time through my 2 Mbps connection, unlike other downloads. I did observe this with some of the official Microsoft downloads.

You can use this tutorial on how-to-install this tool. As a guide to analyze your reports using WPT, this case-studies would be useful.

My Experience in solving Windows 8 or 8.1 Boot Problems

From the case-studies I have studied above, I observed that platter drives (old HDD hard-disks) are the cause of boot issues in Windows 8 and 8.1 64 bit OS. See this comment on one of the above posts, which will make you agree to what I say..

Don’t come to a conclusion. That this can be the only cause.

As stated above, if you replaced your old HDD with SSD (solid state drive) and still experiencing problem, it can be related to driver and updates. Always its best to check compatibility of your driver for Windows 8 and 8.1. Also some of the times, Updates can cause problems after installation.

So was I able to Solve the Boot Issue ?

A sort of.. Why? Because the boot times on my current Windows 8.1 64 bit is around 120 seconds. That is the same as I mentioned earlier. I was not able to implement the solution I proposed because of lack of funds. So unless I get a SSD and test the boot times, I cannot confidently say that is the problem.

What was the alternative ?

The best thing I observed was that my boot times after shut-down and hibernate are not really affected by my existent 80 GB HDD on which my Windows 8.1 64 bit OS resides. I was quickly able to come to desktop screen after hibernate and shut-down (around 40 secs). The problem is only with re-start. So as a alternative I decided to less re-start.

What else I did ?

Also I uninstalled the default metro apps which were not working and re-installed them. I also disabled and enabled the “Turn on fast-startup(recommended)” at boot times to see if there was any change.

I also analyzed the reports from WPR tool. The log was about 3 GB and used WPA to view it. 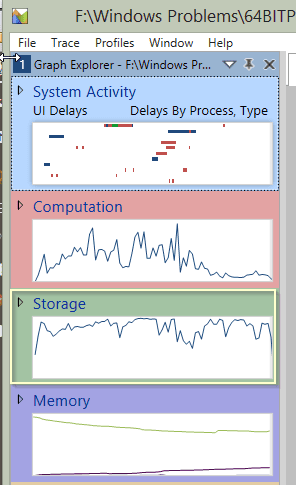 The Windows Performance Recorder (WPR) will ask you for some options to check before you record the logs. Once given, it will re-start three times, each time recording the boot scenario. Those logs are stored as files with .etl extension. There will be 3 files. Double-clicking the file will automatically open Windows Performance Analyzer (WPA).

The above screenshot is one of the logs opened. As you can see above the Storage tab shows that it’s full of disk activity during boot-up. If you click the arrow next to it, you’ll see some more options. Under File I/O I checked Size by Process, Duration by Process and Count by Process windows.

You just have to drag and drop that window from left, on to the right-side for detailed view.

As you can see, the “System“ process is taking considerable hard-disk resources and time during the start-up. If you are an expert or administrator, you can further analyze these logs for further study.

Note : Some important confidential data about your computer may be present in these logs, so don’t share with third-parties.

I found that my memory and CPU were ok during boot-up using these reports.

I want to conclude this article, saying that too much analyzing the reports is wastage of time. Better post in some forum like eightforums.com, tomshardware.com, superuser.com which have useful resources on this issue.

It almost took to 3 days to conclude conscientiously and agree that there is some other problem “alien” to my current expertise. So I decided to stop researching on this topic and start working on my other jobs.

Please share this post in your circles, tweet it and recommend it , if you really like what I wrote. Commenting is not a bad option. Also let me know whether your problems subsided if you followed the above solutions ? Was it simple to use the WPR ? How successful were you in analyzing its reports?